Greetings, O mortal beings of Shan! Our thanks for your kind attentions, as we transmit into your eyes the second of our Kook Komix, part of this series of JCO-TK collabs. Do not fear these vibrations, friends; you will very quickly become accustomed to their power. Remain tuned in as you scroll to receive the fullness of our message.

"This is... this is not how George told the story!"

Yes, admittedly, our recounting of the August 1953 meeting between George W. Van Tassel and Solgonda takes some license - for example, Solgonda may not have had legs at all - but we believe that our version captures the comic spirit. As for the Integratron, the Rejuvenation / Time Machine dome based on the plans of Mr. Van Tassel's space contacts: it remained incomplete at the time of George's death, having been continuously under construction for over two decades.

Ah, yes, you're right; we're getting ahead of ourselves.

The story of George W. Van Tassel begins with the roar of the aeroplane. As a pilot and airline mechanic, Van Tassel spent the length of a twenty-year long career in the aviation industry, his working days engaged in the flying, testing, building, and repairing of planes. After these years of the grind in the service of Douglas, Lockheed, and Howard Hughes, and increasing dissatisfaction with the hustle of city living, George sought after a simpler life, and so retired with his wife and daughters to the tranquility of Giant Rock, an outpost near Landers, California, out in the Mojave. 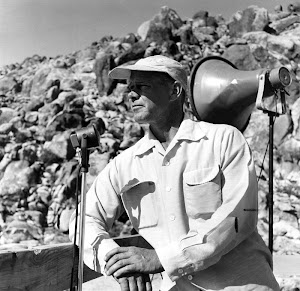 It was there in the quiet desert, beginning in the early 1950s, that Van Tassel began his routine contacts with the Space People by a method of trance channeling, utilising what he later called "tensor" beams, first detailed in "I Rode a Flying Saucer: The Mystery of the Flying Saucers Revealed through George W. Van Tassel, Radioned to you by Other-World Intelligences in Reaction to Man's Destructive Action" (1952). Through means of such tensor-ray induction were characters the likes of Ashtar and the Council of Seven Lights given voice; and through the Ministry and College of Universal Wisdom, these received communications from the Space Brothers offered by Van Tassel to the world.

This was the Golden Age of Contact. The Van Tassels' home at Giant Rock became a nexus for Space Brother contactees and true believers, playing host to the annual Interplanetary Spacecraft Convention (1953-1978). All the big names found themselves speaking from the platform on the rock: Daniel Fry, Orfeo Angelucci, Frank Scully, Howard Menger, George Hunt Williamson, Evelyn Smith, Truman Bethurum, and on, and on. Even Mark Probert and Meade Layne made their appearances.

And so it went, with guidance from space and the support of his peers, that George began to build his Integratron: an electro-static magnetic generator, a new Mosiac tabernacle, a Lakhovsky Multi-Wave Oscillator operating instantly via time function control. After first completing scale models following the 1953 meeting, Van Tassel and the Ministry erected a four story high, 55 ft diametre, wood-and-fibreglass dome by 1959, sized up to allow some ten-thousand people to pass through in a day, each individual following the paths of energy fields the geometries formed, to become healed and renewed. This space would be the laboratory and proving ground for research in human vitality, cellular rejuvenation, total communication, and time travel. A gift to humanity; a tool in waiting for the Lord's return.

(That's Jesus, not Solgonda. These are good Christian teachings, y'understand.)

The construction and refinement continued through the sixties and seventies, drawing on private donations from countless generous benefactors. The Integratron was to be perfected, but this would take time. More time than the builder had, as it turned out.

The plans for the Integratron, carefully preserved by Van Tassel in life, have been missing ever since.

For more on George, Solgonda, and their Integratron, we direct your attention:

Or, read Van Tassel's books (some words his own, some channel transcripts):

Or, just listen to Perry Como records until you're ready for contact: So Smooth.

You will see more of us if you watch the skies.

In the next instalment of Kook Komix, we will be reporting on Albert K. Bender.